When you ask a track guy which single mod makes you faster, the most common response is “seat time.” Indeed time is a valuable commodity when it comes to understanding cars—these days, long-term ownership seems to have fallen out of fashion—but to incrementally improve your car after adequate seat time is a surefire way to fall deeply in love with each discernable change, whether on the street or track.

We’ve had the pleasure of helping upgrade Ed’s Fire Orange M4 ever since he bought it back in 2015. As a bit of backstory, even obtaining the Fire Orange car was an uphill battle—a year-long one at that. Inspired by the E92 M3 GTS, it was a color that he had to have, one that would provide the perfect foundation onto which he’d construct a GTS of his own imagination.

Straight from the port, Ed’s M4 was adorned with a slew of BMW M Performance parts: an Alcantara LED steering wheel and carbon shift knob cover / accompanying trim complimented the orange-stitched interior, while gloss black kidney grilles, front lip, side skirt extensions, and M Performance exhaust rounded out the visual cues outside. Our first wave of mods accented the BMW treatment with bits of carbon—splitters and an Motorsport24 wing. Not to be overlooked, a Fall-Line oil cooler guard was fitted for peace of mind while a set of black BBS FI-Rs gave those lovely CCBs some time to shine. At this point, the odometer was just sneaking into the triple digits, so Ed took the opportunity to drive the car back to get acquainted. 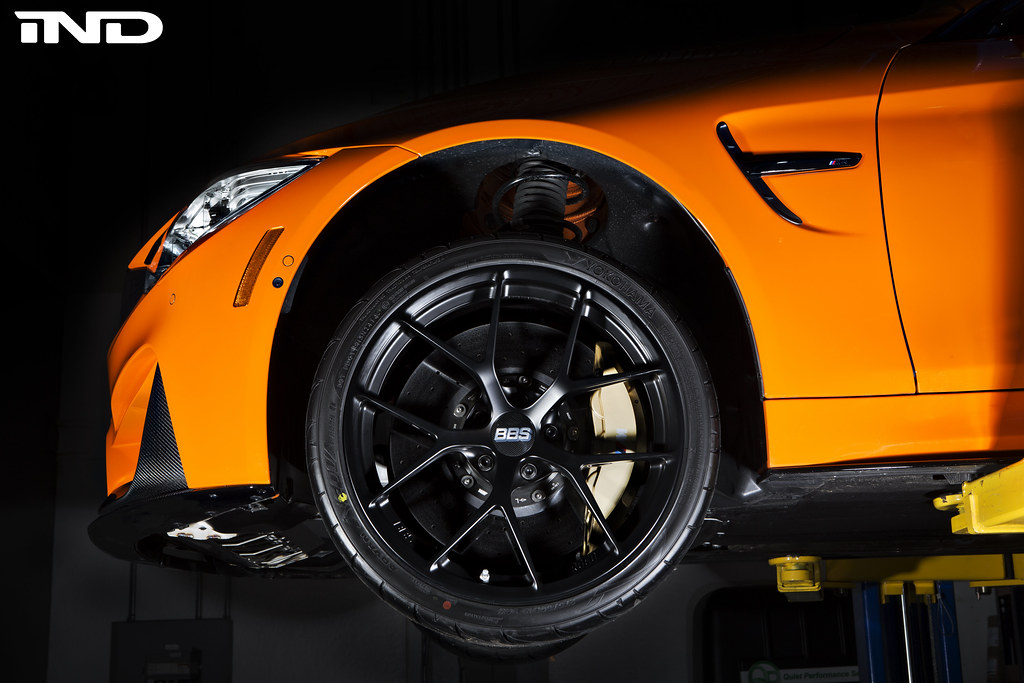 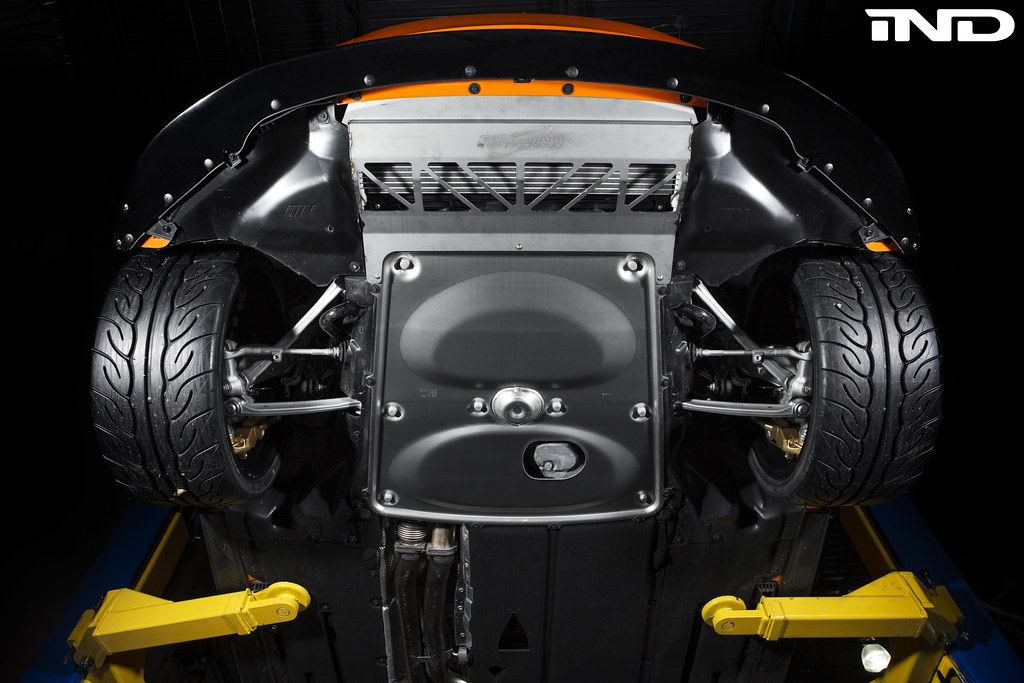 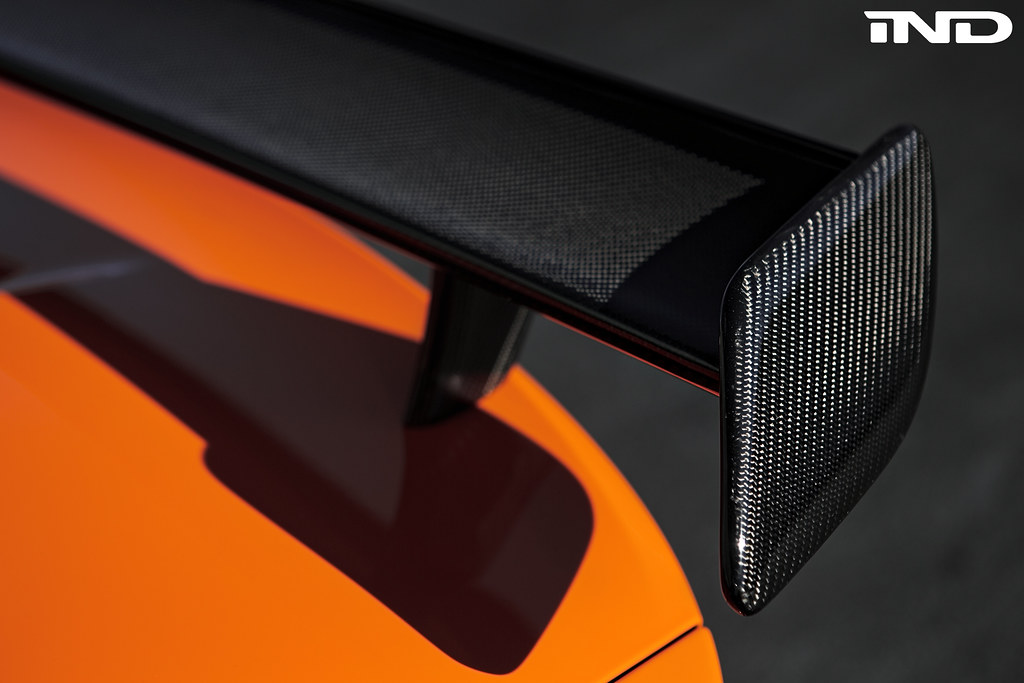 Over a year later, it was clear that Ed has been bitten by the motorsport bug. The M4 had gotten its first taste of track time and with it, Ed had begun to understand how and where he wanted to improve the car to suit his driving style. His subsequent visit drew more attention inside: a factory GTS roll bar, RKP GTS closeout, custom Recaro Profi XLs (with illuminated M4 seat badging and matching orange stitch), and an impressive array of data acquisition made the cockpit decidedly focused. The only change outside was a swap to a RKP GTS wing with high mounts to capture a bit more downforce than the Motorsport24 unit could muster. 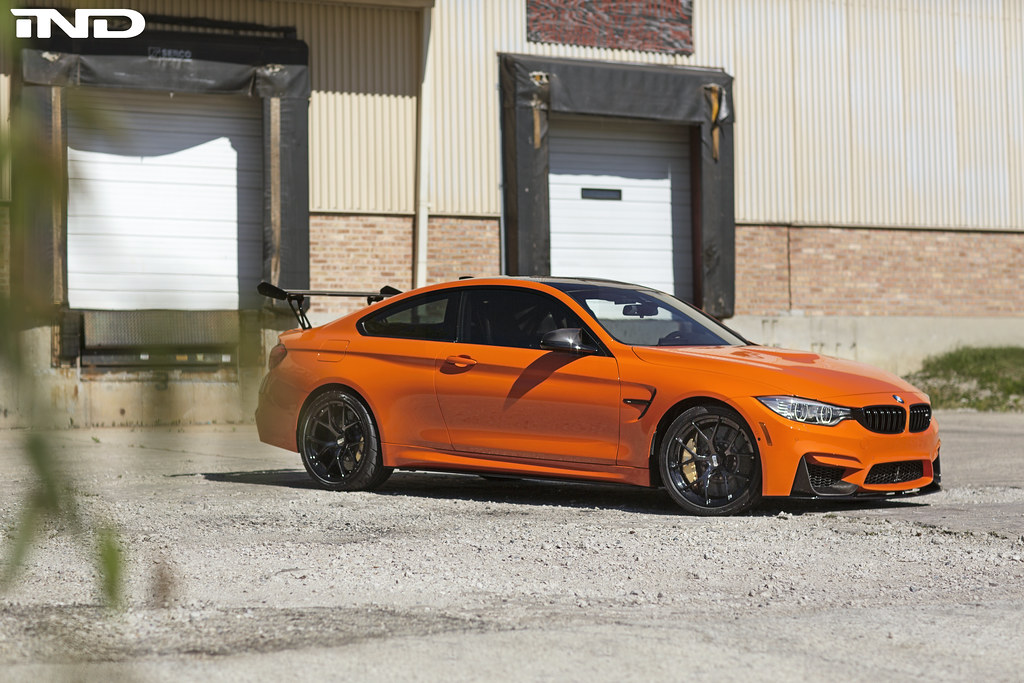 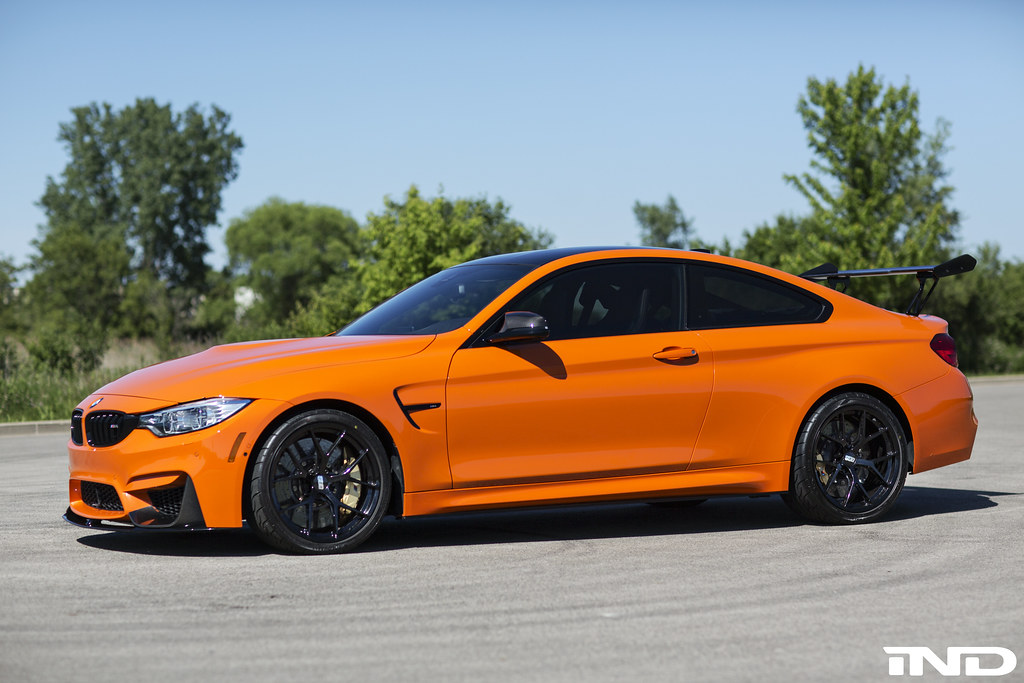 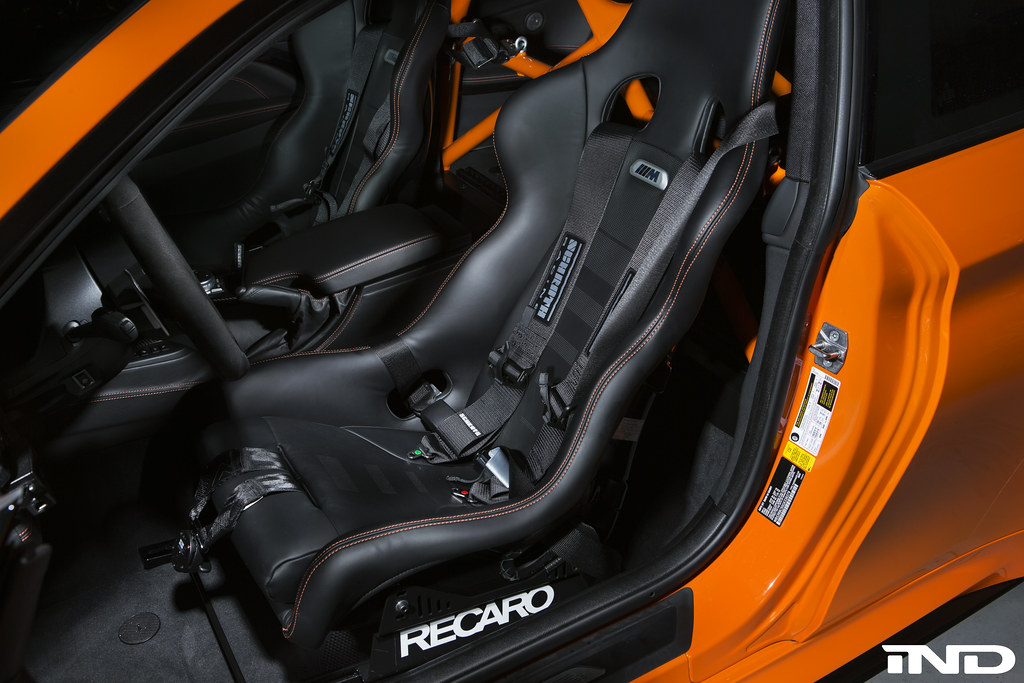 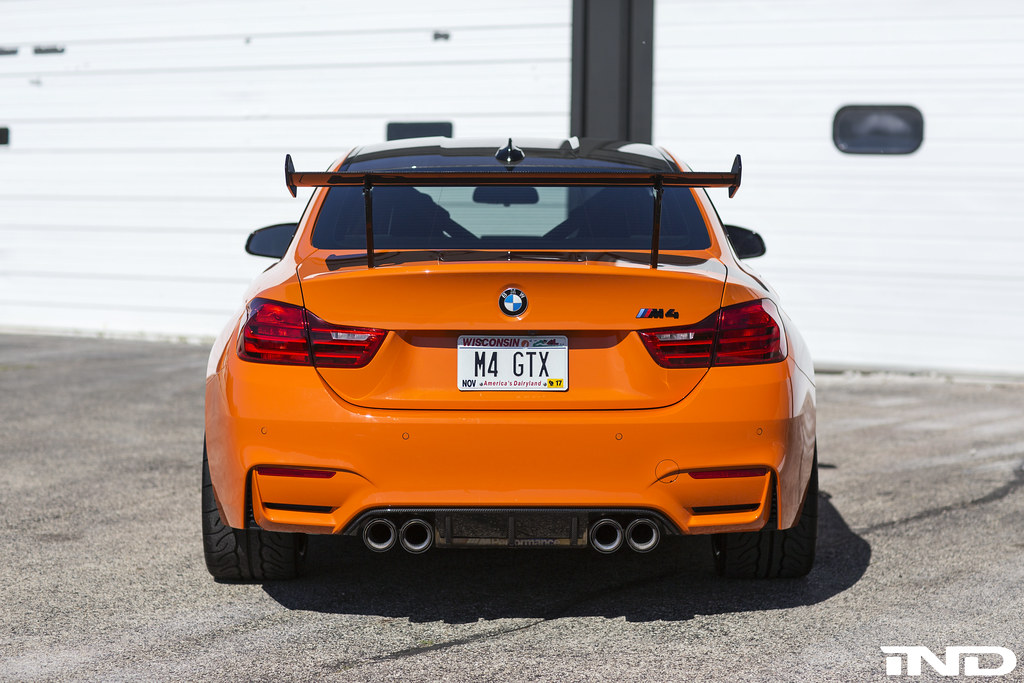 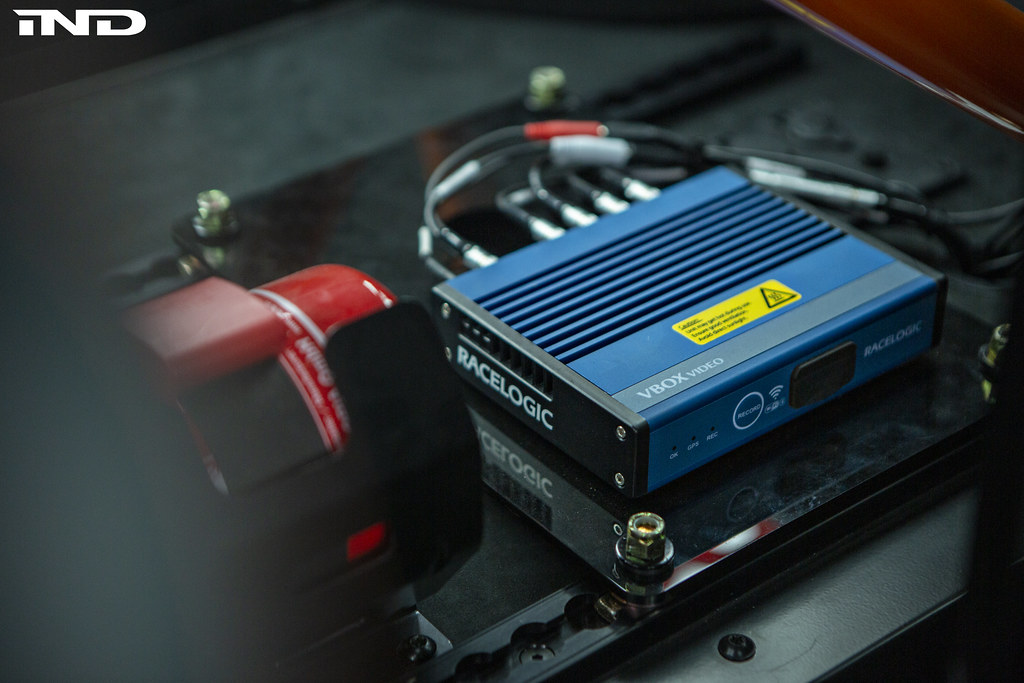 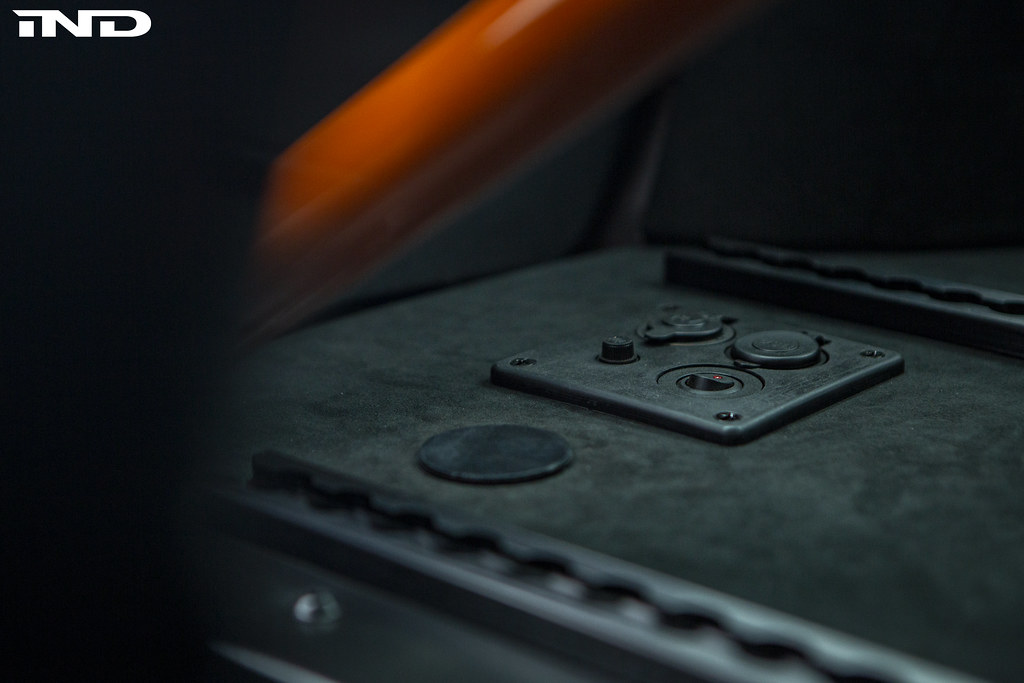 Like clockwork, another year passed and Ed was ready for more. The third visit brought about even more changes that would extract even more track performance out of the car including a set of KW 3-Way Clubsports and the full gamut of Fall-Line Motorsports parts: sway bar end links, monoball conversion, camber shim kit, race toe arms, and rear upper bushings. To offset the extra speed Ed would be carrying, an Essex AP big brake kit was installed as well. It wouldn’t be a complete IND visit without a bit of cosmetic surgery to go along with all of the “hidden” upgrades, so an OEM GTS hood was fitted for good measure. The car took on a decidedly more menacing demeanor and, mod by mod, we were falling in love with the car just as much as Ed. 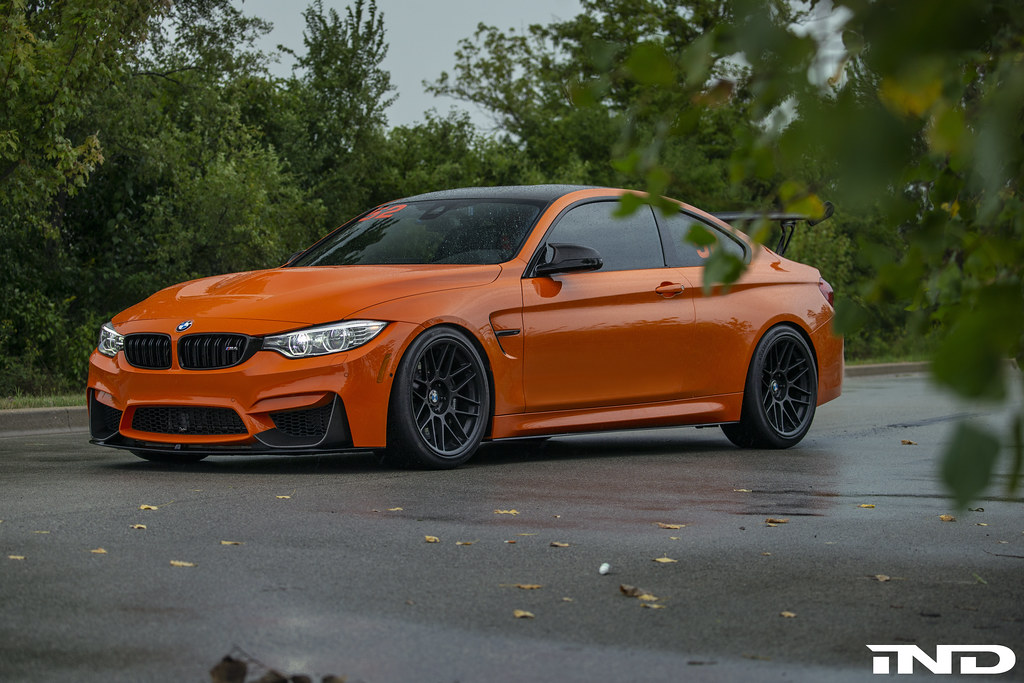 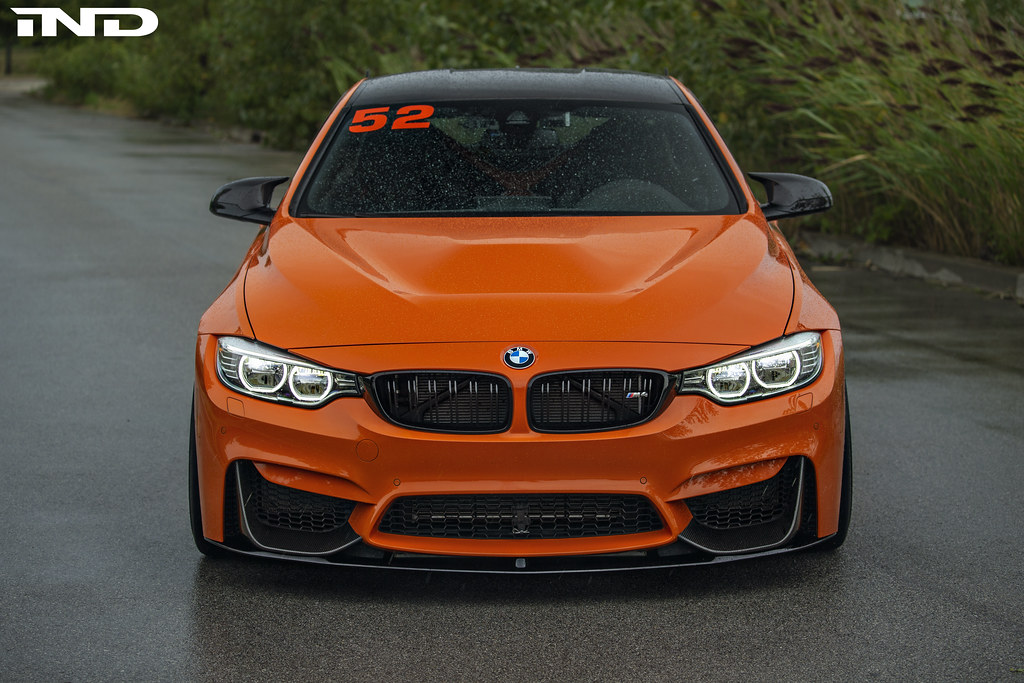 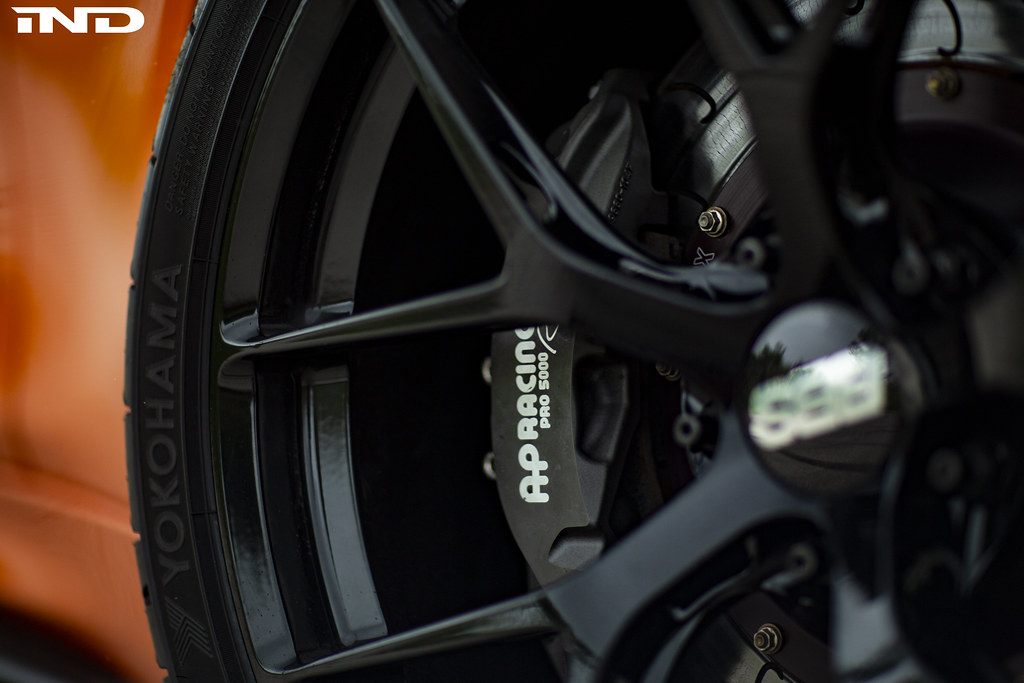 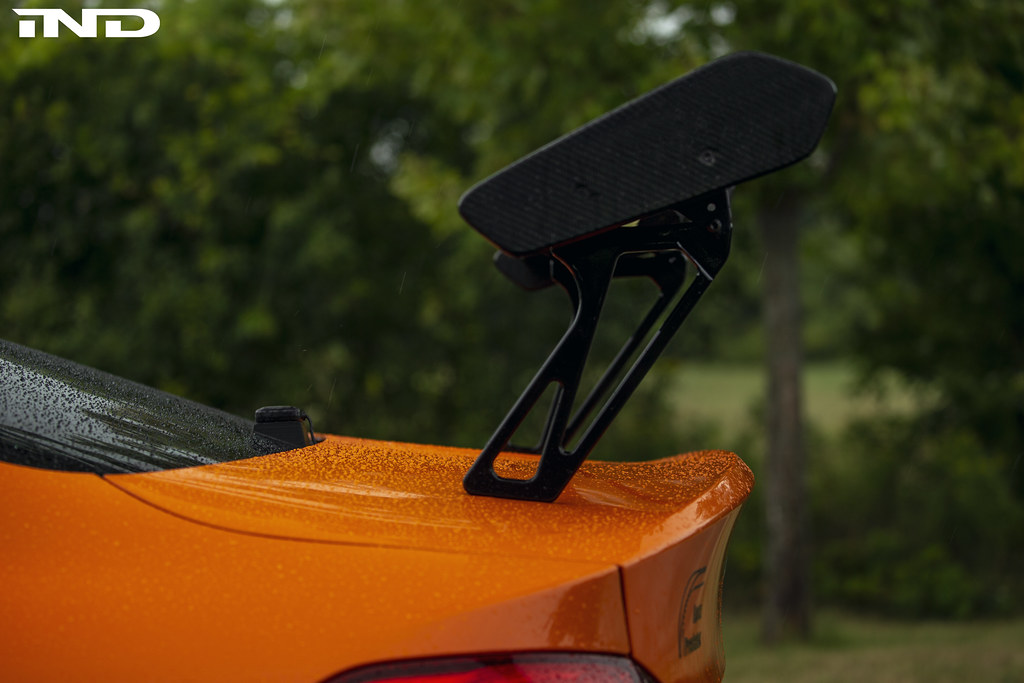 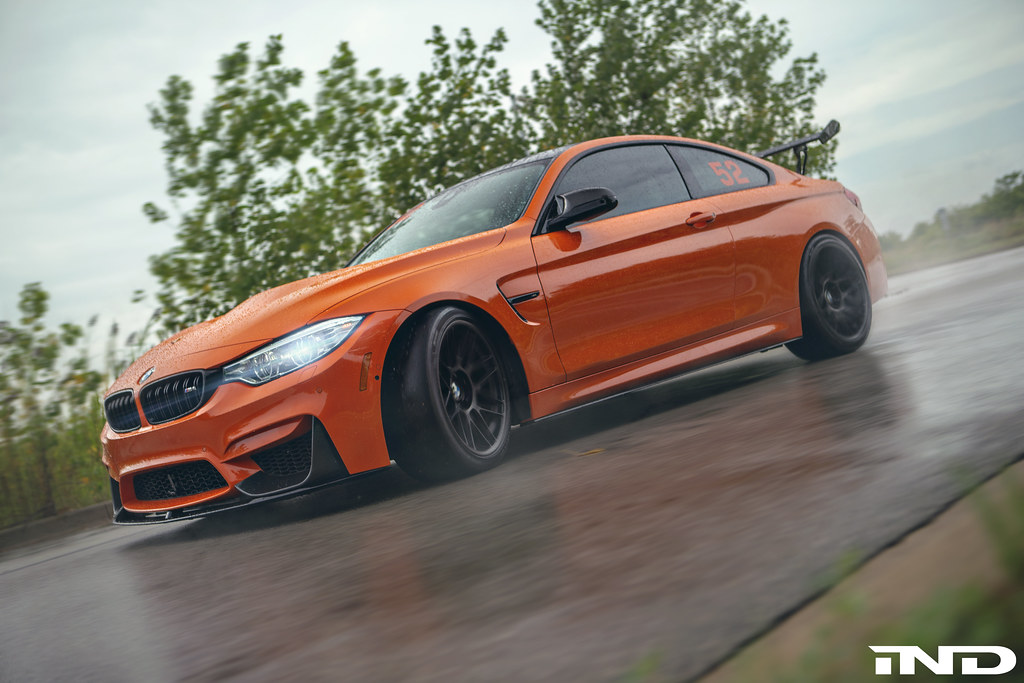 We now find ourselves steaming through 2019 and, as you might expect, we got a call from Ed about performing a few more changes to his M4. This visit was more about fine tuning the previous wave of mods from the year prior. A nip and tuck came in the form of a Fall-Line Motorsports brake duct kit (routed to RKP M4 GT4 carbon bumper ducts) and Dinan sway bars. The former ensures consistent and long-lasting brake performance at some of the more demanding tracks his M4 will see, while the latter dials out the remaining chassis lean so Ed could trust the car to respond to his inputs with agility. 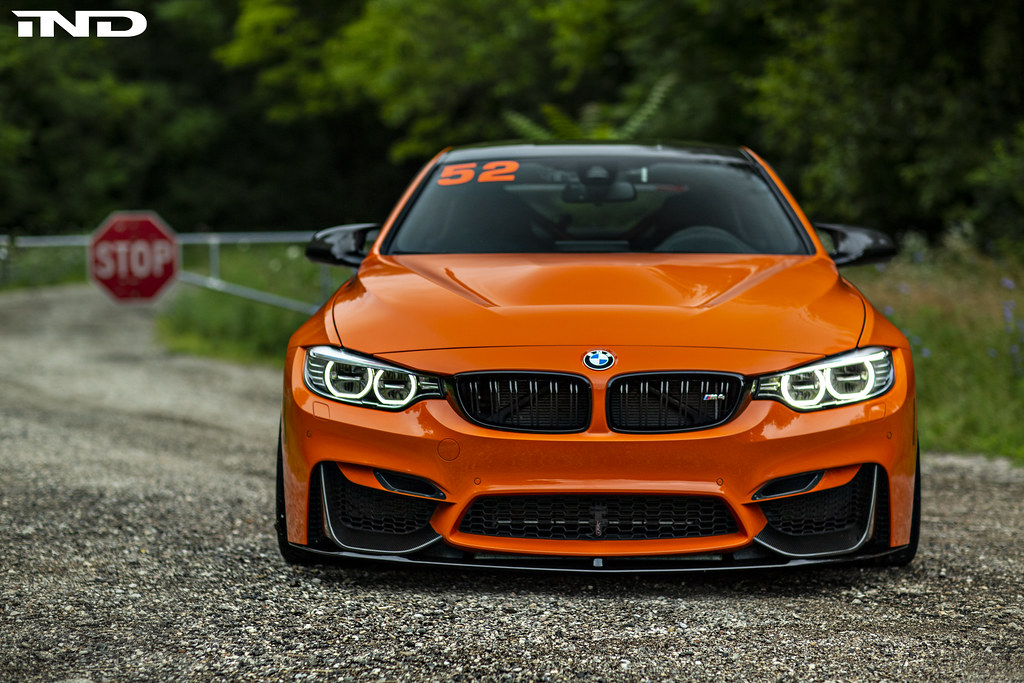 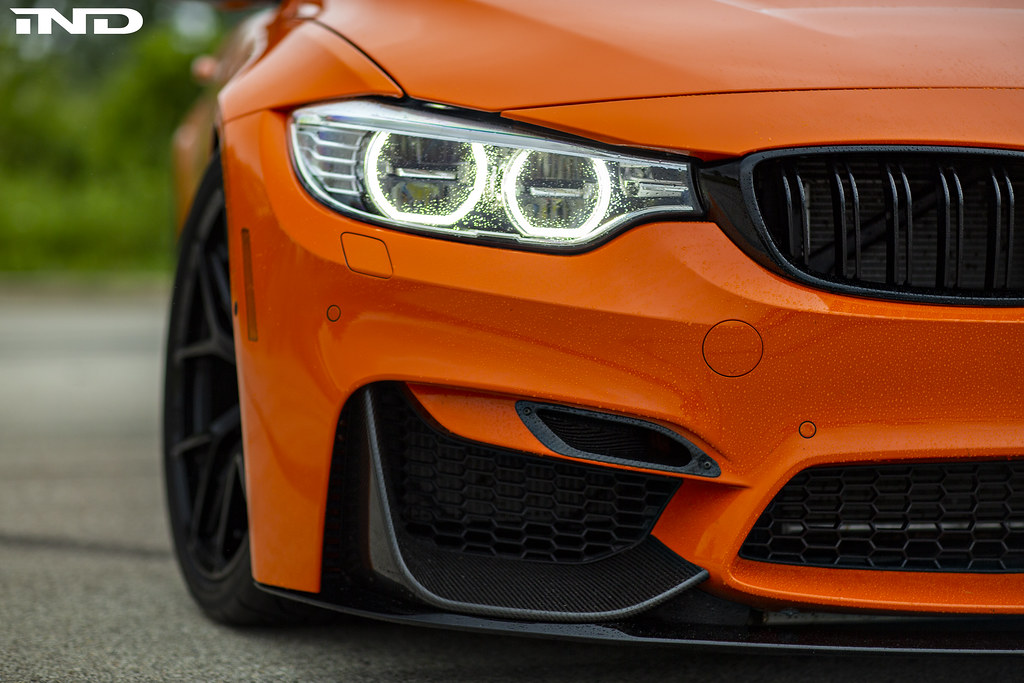 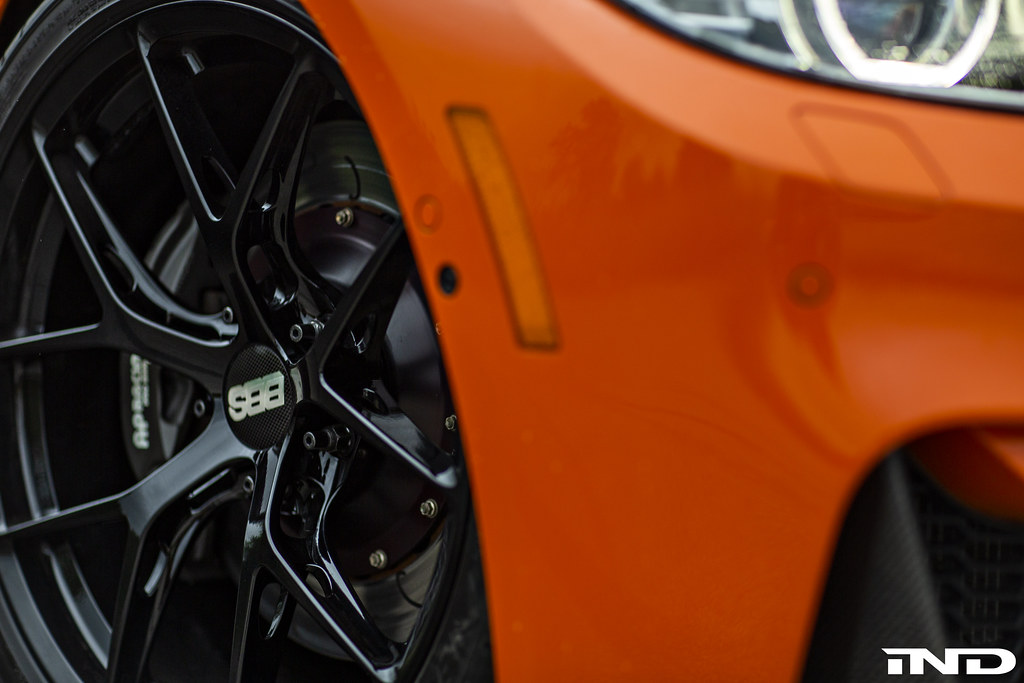 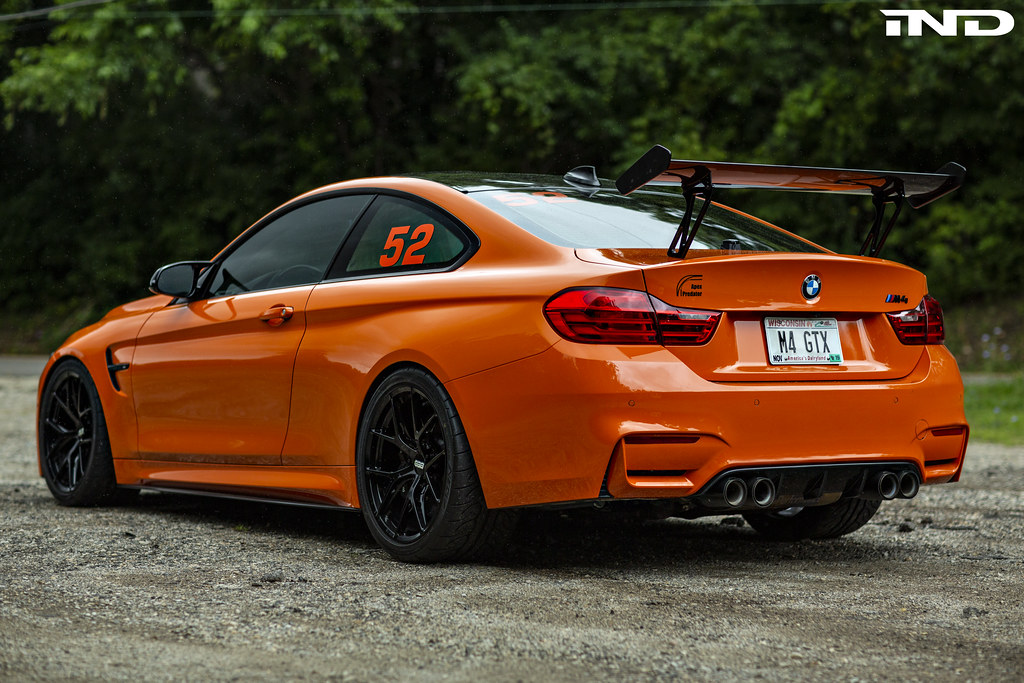 I drove the car for a few moments to shoot photos prior to Ed coming by to pick it up. Bringing it to life comes with a roar that befits its Fire Orange exterior, but it’s once you start putting incremental pressure on the throttle that you start to really notice the effect of the last four years come to fruition. It is easily one of the most pleasurable M4’s I’ve driven to date—balanced, predictable, and planted without being brutal or ill-suited for dual duty if, say, you asked it to make a quick grocery run after a day at the track. 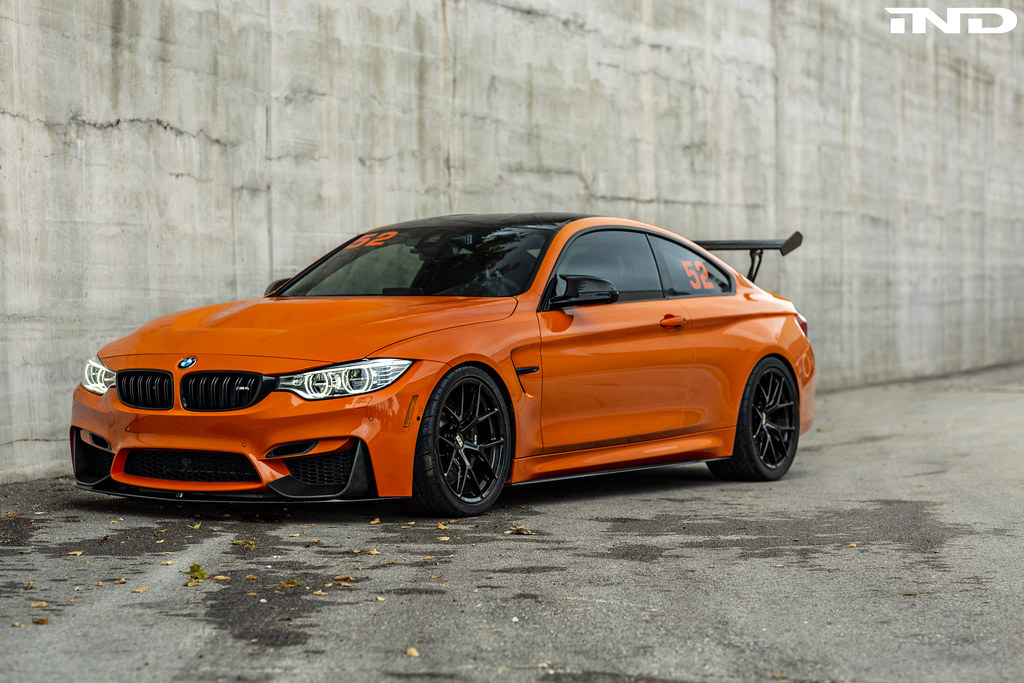 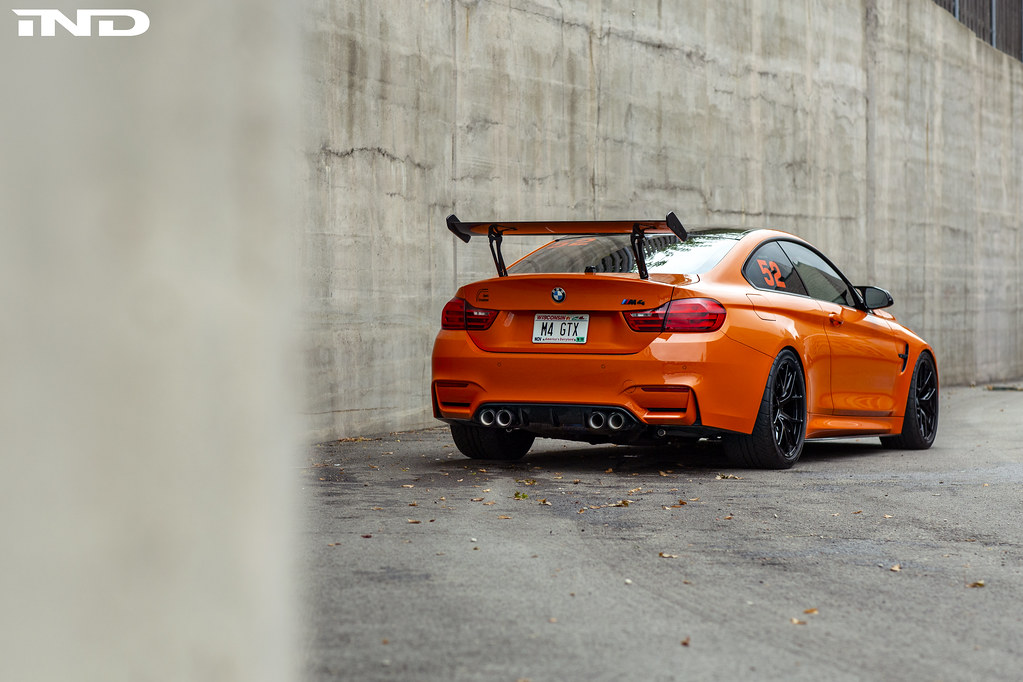 But more than its sublime driving behavior, it’s a car that’s been built to teach. Each year’s transformations—both to the car and driver experience—have been meticulously reviewed and logged to show Ed exactly where he’s been and where he stands today. It’s a car that has transformed from a simple tool to an integral part of Ed, something that has creates fond memories for him, and to be honest, us too. There’s plenty to look forward to in 2020, but more face time with this Fire Orange M4, certainly ranks amongst the top.